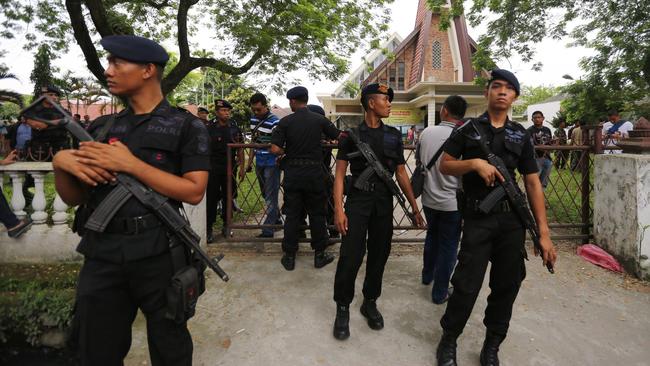 JAKARTA - A knife-wielding Indonesian teen who tried to attack a priest at a church during a Sunday service was "obsessed" with extremist group Islamic State, a senior minister said on Monday.

Indonesian authorities are increasingly worried about a resurgence in radicalism in the world's largest Muslim-majority country, driven in part by a new generation of jihadis inspired by Islamic State (IS).

"From the cellphone that was seized by security forces, this youth was obsessed with Abu Bakr al-Baghdadi," Chief Security Minister Wiranto told reporters, referring to the leader of the Middle Eastern militant group.

Wiranto, who goes by one name, said a note was found in the attacker's backpack that said "I love al-Baghdadi" but added the suspect had no known links to existing militant networks.

There were no serious casualties in the latest attempted attack, which happened in a church in Medan, northern Sumatra. Police said the attacker had attempted to stab the priest, who suffered minor injuries, and detonate a crude home-made bomb but failed after being restrained by other worshippers.

The suspect, identified as 17-year-old Ivan Armadi is under interrogation. Police seized bomb-making materials from his home after the attack and said he had learned to assemble a bomb through online research.

Counter-terrorism officials have said there are hundreds of IS sympathisers in Indonesia, where the vast majority of Muslims practice a moderate form of the religion. The country suffered its first IS-linked attack in January, when four people died in a gun and bomb assault.