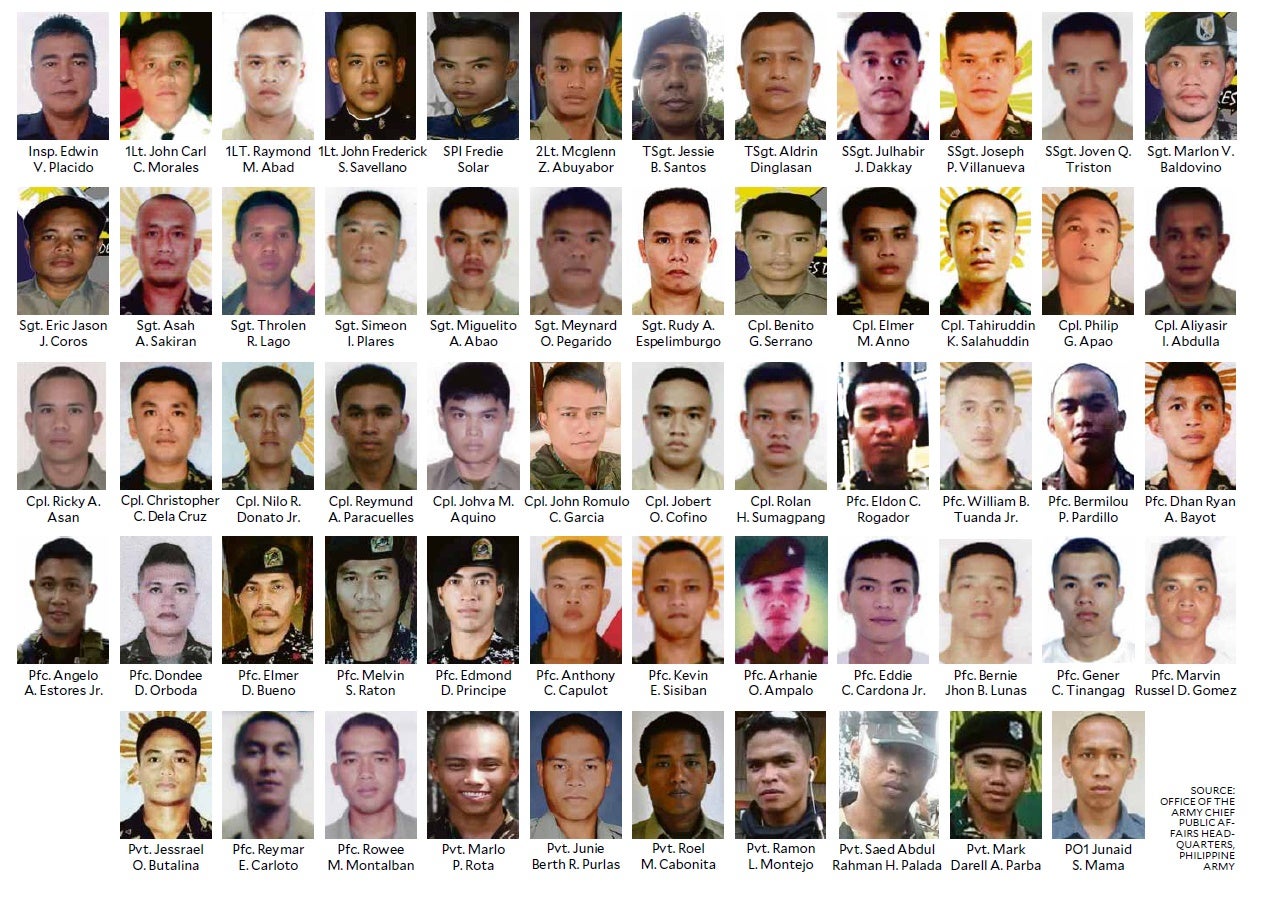 The nation today (Monday) salutes soldiers and civilians killed in the fighting between government forces and Islamic State (IS)-inspired terrorists in Marawi City as it commemorates the 119th anniversary of its independence.

Brig. Gen. Restituto Padilla Jr., spokesperson for the Armed Forces of the Philippines, on Sunday said Malacañang had requested television networks and radio stations to air the salute at 12 noon.

“The names of our gallant soldiers who died fighting in Marawi City will be flashed on TV and read over the radio. While we couldn’t name all the noncombatants in the tribute, we will ensure that the civilians who perished will also be given the proper honor,” Padilla told the Inquirer.

Taps will be sounded after the reading of the fallen soldiers’  names, he said.

Padilla said he had asked the Catholic Church for a tolling of church bells to follow the bugle call.
He also urged the public to join the honors for the fallen troops and civilians by honking their vehicles’ horns.

As of Sunday, 58 soldiers have been killed in battles with  Maute and Abu Sayyaf gunmen who have laid siege to Marawi in an attempt to establish a province in the Philippines for the ultraradical Islamic State (IS) group in Iraq and Syria.

The military said 20 civilians and 138 terrorists had been killed in the fighting.

The death toll on the government’s side rose to 58 on Friday with the deaths of 13 Marines in a 14-hour gun battle in the vicinity of Lilot Madaya village in Marawi.

It was the biggest single-day battlefield loss for the government since the crisis began on May 23.

Friday’s clash began with an assault launched by the Marines on a Maute position at around 3:30 a.m. that led to a close-quarter battle that lasted up to 5 p.m.

The military said the Marines inflicted heavy losses on the terrorists, but lost 13 of their own.
Forty other Marines were wounded in the fighting, it said.

Malacañang on Sunday mourned the deaths of the 13 Marines as a lawmaker urged the  immediate passage of legislation that would grant financial assistance and benefits to families of soldiers and policemen killed in action.

“The Palace is deeply saddened by the news on the 13 Marines killed in action during a firefight in Marawi City,” presidential spokesperson Ernesto Abella said in a statement.

“They fought gallantly for the liberation of our Maranao brothers and sisters,” he added.

“This incident, albeit unfortunate, gives us greater impetus to clear Marawi of lawless elements, save the trapped civilians, and restore order, security and normalcy to the city and its residents,” Abella said.

“Let us continue showing our strong support to our courageous and heroic men and women in uniform fighting for Marawi and defending the republic,” he added.

Angara is one of the authors of Senate Bill No. 1462, or the Uniformed and Law Enforcement Personnel Educational Assistance Act, which would grant special benefits to military and police families.

Among the benefits are six months’ salary, including allowances and bonuses.
Angara conveyed his condolences to the families of the 13 Marines killed in Marawi on Friday.

In a separate statement, Sen. Francis Pangilinan thanked the Marines for their sacrifice and joined their families in mourning.

“We will be forever grateful to our soldiers who have offered their lives in the service of our nation.

We grieve with all the families who have lost a loved one in [these] ongoing armed hostilities,” Pangilinan said.

Padilla said the military was grateful for the public’s show of support.

Social media has been abuzz with tributes to the soldiers who have perished battling the terrorists.

The rogue AFP Twitter account @altTeamAFP and the Philippine Defense Forces Forum, a Facebook public page, have been compiling lists of soldiers killed in action, accompanied by photographs of the fallen troops, brief biographies and stories of their heroism.

Among the stories were those of Marine 1st Lt. Frederick Savellano and Army Pfc. Dhan Ryan Bayot.

Savellano was the commander of the 37th Marine Company of the Marine Battalion Landing Team that last week found P79 million in banknotes and stale checks in a house in Marawi that terrorists had used as a sniper’s nest.

He was killed in action on Saturday. He was a graduate of the US Marine officer basic course and had been set to marry his fiancée, also a Marine officer, this year.

Bayot, 24, urged his commanding officer to direct artillery fire on his location in Lilod village as enemy forces closed in on him and his dead companions on May 24. His body was recovered four days later.

As the nation marks Independence Day, Marawi defies the terrorists by raising the Philippine flag at the Lanao del Sur provincial capitol today.

Norhanie Marohombsar, city director of the Department of the Interior and Local Government (DILG) in Marawi, said the flag-raising would be held even if fighting was going on in some parts of the city.

Marohombsar said the DILG gathered Marawi’s village leaders in a hotel in Iligan City on Sunday for a briefing on the flag-raising.

She said all the village leaders were accounted for, but not all made it to the meeting because some had relocated to other places, including Cagayan de Oro and Lanao del Norte.

The DILG issued identification cards to the village chiefs and volunteers to stop potential infiltrators.
Freedom by Monday

The military said it hoped to “liberate” Marawi from the terrorists who had pledged allegiance to IS by Monday.

Wahab Dia, chair of Lumbac Marinaut village, said he hoped the city could finally be cleared so that the displaced residents  could return to their homes.

The government has allocated P10 billion for the rehabilitation of Marawi, with the Department of National Defense leading the rebuilding of the city ravaged by more than two weeks of fighting.

JAKARTA: The presence of militants from an Indonesian terror group among Maute combatants fighting in Marawi City reinforces the appeal of the southern Philippines to extremists in the region who are loyal to the Islamic (IS).

That the Jemaah Ansharut Daulah (JAD) sent no fewer than 40 fighters from Indonesia to Mindanao, despite its own struggle back home, shows that it too believes victory over Philippine security forces will further its broader mission in Southeast Asia, said analysts.

IS, to which both the JAD and Maute group have pledged their allegiance, wants to expand and create its next wilayah, or state, in the region even as it loses territory in the Middle East.

"For Indonesian militants, and in the context of Southeast Asia, southern Philippines is the most ideal for that purpose," said Taufik Andrie, executive director of the Institute for International Peace Building think-tank last Friday.

On Sunday, the Philippine military observed a day of silence and prayer to honour 13 Marines killed in action last Friday. It was the biggest single-day loss for troops trying to retake Marawi from the Maute militants.

As clashes in Marawi head into their third week, regional security agencies have picked up intelligence that foreign fighters from places like Chechnya, Morocco and Saudi Arabia are among the Maute.

The actual size of the Maute's fighting force in Marawi is unclear, with estimates so far ranging from a few hundred to over a thousand.

IS, to which both the JAD and Maute group have pledged their allegiance, wants to expand and create its next wilayah, or state, in the region even as it loses territory in the Middle East.

But the largest groups of foreign fighters by far seem to be from Indonesia and Malaysia, which share sea borders with the Philippines.

It was reported last week that 28 Malaysians have joined the conflict.

But what raised alarm was Indonesia's National Counter-terrorism Agency chief Suhardi Alius' confirmation last Thursday that 40 Indonesians fighting in Marawi are followers of the JAD.

The group is led by Aman Abdurrahman, a jailed ideologue who ordered his followers to mount a suicide attack in Jakarta in January last year. It was also linked to several other attacks in Indonesia, including twin suicide bombings in East Jakarta on May 23, which killed three policemen.

An offshoot of the Jemaah Islamiah (JI) terror network behind the 2002 Bali bombings, the JAD is known for mounting deadly attacks, especially on the Indonesian police.

In January, the JAD was placed on a United States counter-terrorism watchlist because of its ties to IS.

Experts say its violent streak is matched by the Maute group, which was formed and named after Moro militant brothers Abdullah and Omarkhayam Maute.

Joseph Franco, a research fellow at the Singapore-based Centre of Excellence for National Security, said the brothers pledged their allegiance to IS two years ago "to project a fiercer image".

Their relentless guerrilla war across Mindanao island attracted the attention of Abu Sayyaf leader Isnilon Hapilon, who knew that merging with the Maute group would lead to greater fighting capability and territorial control, he added.

The JAD may be looking to make a similar impact by joining the Maute in its battles in Marawi, noted other counter-terrorism watchers. Taufik said this also aligns with an IS edict in 2015 telling followers who cannot travel and join its struggle in the Middle East to either bear arms in the nearest conflict where its loyalists are at war, or strike at home.

The Australian newspaper on Saturday quoted an Indonesian who trained at a militant camp in Mindanao some years ago as saying that "the Marawi siege has reinvigorated Indonesian jihadists".

According to Iqbal Hussaini, who was jailed for smuggling weapons from the southern Philippines to JI terrorists in Indonesia, many of his countrymen now want to join the Maute group.

"Many are looking for the next jihad," he added. "The likelihood that Marawi will become a base for IS is very, very high."

There are also fears in Indonesia and Malaysia that citizens who fought in Marawi may return, battle-hardened with combat experience, to orchestrate attacks.

The Riau Islands police said last Friday that it was beefing up security at ports and other sea entry points to prevent incursions by militants, including those from Indonesia, being flushed out from Marawi.

This followed the Indonesian military's move last week to increase its troops and surveillance operations in areas bordering the southern Philippines, such as Kalimantan, North Maluku and Sulawesi. - The Straits Times/Asia News Network
Posted by wikisabah at 10:30:00 AM