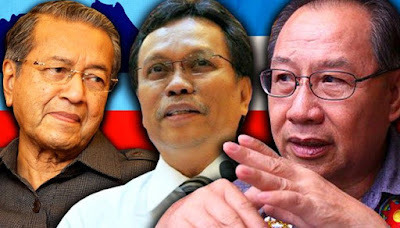 Kota Kinabalu, June 28, 2020:   "There is no noble intention by Tun Mahathir Mohamad in wanting to make  Shafie Apdal the next Prime Minister and Anwar Ibrahim and Mukhriz Mahathir as Deputy Prime Ministers" said Datuk Dr. Jeffrey Kitingan, President of Parti Solidariti Tanah Airku, in a press statement on the matter.

It stinks of a plot to not only attempting to bring down Tan Sri Muhyiddin Yassin’s government but to block Anwar Ibrahim  from becoming PM.

Sabahans must not be hoodwinked into thinking this idea came from a good place. Mahathir is desperate and toying with Sabahans, using them as tools in an attempt to topple the Perikatan Nasional government and  deny Anwar the premiership.   It was also with a hidden motive to prevent Shafie's Warisan party's elected representatives from deserting the party and collapsing the Sabah government.

The people must also realize that Mahathir has reneged on his promises numerous times, flip flopping and making u-turns on many decisions. Why would he be any different on this one?

Anwar has been prime minister in waiting for ages and it makes no sense that Mahathir wants Shafie to be the next Prime Minister and Anwar and Mukhriz Mahathir to be his deputies.

If Mahathir was sincere in his intentions, he would just hand over the baton to Anwar instead of a proposal that looks more like a succession plan for his son, Mukhriz.

Furthermore, it is ridiculous for Mahathir to suggest someone for the PM post from Warisan, a party that was not even part of Pakatan Harapan.

It is obvious that Mahathir is lashing out at Anwar Ibrahim for not agreeing to make him PM for the third time and he vents his anger by proposing a PM from Sabah regardless of whether the proposed person is prime minister material or not.

It also appears that his announcement that leaders in PH Plus unanimously agreed to make Shafie PM contradicts with that of DAP and Amanah leaders who said they have not decided on the matter.  It also completely ignores PKR and Anwar.

Pakatan’s almost two years' rule under Mahathir was constantly bogged down by political tension among its leaders, namely between Mahathir and Anwar.

The people are fed up with the Mahathir-Anwar saga, the endless dramas and politicking. Mahathir needs to cease this political game, using people as pawns and constantly  plotting against his rivals.   He should heed the Agong's advice to stop political turmoil and to prioritize the rakyat which are facing the twin threats of the Covid-19 pandemic and economic slowdown.

His plans on making Shafie the Prime Minister is also another hare-brain scheme to get back at Najib Razak.

It seems that Mahathir has completely overlooked how the process of democracy works.

While DAP commands the most seats, seeking the Prime Minister post is unlikely part of their agenda.  At least not on the surface.

However, Mahathir is clearly insulting Mat Sabu who has 11 MPs and yet he has been nonchalantly bypassed by Shafie who only commands 9 MPs.  Does this mean Mat Sabu is less capable and lacks leadership quality or that the 11 MPs from Amanah are irrelevant?

Even GPS in neighbouring Sarawak that  has 18 MPs voiced their shock at this move to make Shafie PM, calling it a fantasy and the joke of the century.

Everything Mahathir does is laced with political motive, greed for power or retribution.

Sabahans remember how Mahathir treated Sabah during his first stint as PM. He completely abandoned Sabah when PBS was in power, just because it was in the opposition.

Neglect is one thing but he completely forsaken Sabahans, blocking all development funds, leaving the State in dire straits.

The people of Sabah have also not forgotten Project IC which until today Mahathir denies having a hand in. However the people know this open secret.

It is true that both Mahathir and Shafie speak the same language because both are defenders of illegal immigrants. The Sabah government under Shafie now has a pro-illegal immigrants policy and marginalises the genuine Sabahans.

If Shafie becomes PM, the flood gates will be open wide to illegal immigrants, allowing many more to make Sabah their home.

Unfortunately some are already part of the system, implementing policies that are illegal immigrant friendly.

Just drive around the city of Kota Kinabalu and you will notice the growing numbers of panhandlers and homeless people.

Those who live on the streets are not exactly law abiding, whereby littering is second nature. KK city has never been more filthy especially the central wet market where the stench in the air travels far and wide. Its worse in Semporna until is is labelled by a foreign tourist as the "dirtiest shithole in the world" and his video viralled worldwide.

Making Shafie Prime Minister will spell  doom for all genuine Sabahans in their own land.

Shafie is slow to act in reviving the economy, provide a conducive environment for employment growth, attract investors and bring further socio-economic development to Sabah.  Apart from officiating and cutting ribbons of projects done by the previous BN government, he has little to show for his 2 years tenure as CM.

Shafie is not even capable of running Sabah properly and yet Mahathir wants him to run the whole country, a move that’s purely political to check mate Anwar.

Sabahans must realize that both Tun Mahathir and Shafie are pulling strings, treating Sabahans as puppets in their insatiable appetite for power.

They are both so busy plotting against the present Prime Minister and ensure another does not become one that they have neglected their real duties as leaders.

The people must realize that if Mahathir and Shafie were at the pinnacle of power, this type of leadership style will continue, mired in constant politicking, witch hunts and political vengeance.   This is totally contrary to the Muhyiddin government which has tackled the Covid-19 pandemic successfully, acknowledged as one of the best in the world, and looked after the welfare and interests of all Malaysians during this difficult time with various assistance packages.

Malaysians will rue the day, if Shafie Apdal with the support of Mahathir is allowed to helm the nation and bring ruin to the people.