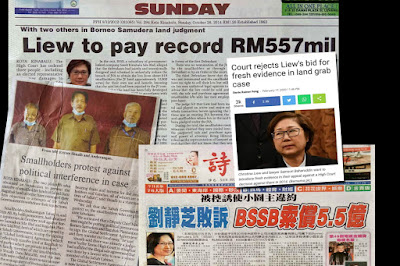 PETALING JAYA: Najib Razak today questioned if the Sabah government’s decision to give a plot of land to settlers in Lahad Datu was linked to a multi-million dollar land grab case involving a deputy chief minister.

Najib said this after Chief Minister Shafie Apdal was reported as saying he did not want the case to be brought to court in explaining his decision to give 6,800ha to residents who had settled at the Bagahak plantation since the 1970s.

Sawit Kinabalu, the company that runs the oil palm plantation there, would be compensated with 18,000ha elsewhere.

Shafie’s deputy Christina Liew and two others were found guilty in 2014 of unlawfully inducing a group of smallholders to breach their joint venture agreement with Borneo Samudera, a subsidiary of state-owned Sawit Kinabalu.

The others were Samsuri Baharuddin, the attorney for a group of 819 smallholders in the Bagahak smallholders’ scheme, and Siti Rahfizah Mihaldin, Liew’s former clerk.

The High Court awarded RM557 million in damages to Borneo Samudera after ruling that it had proven the requisite conditions in law of inducement of breach of contract.

Liew, who was then a lawyer in the opposition, has appealed against the decision.

But Najib wondered what would become of her case, now that the state government had returned the land to the settlers.

Najib said if indeed the decision to return the land to the settlers was to settle Liew’s case, then it would be an abuse of power on Shafie’s part.

This was because Liew would stand to benefit the most from the decision as she would not have to pay over half a billion ringgit.

“If this happens, I hope the Malaysian Anti-Corruption Commission will continue its probe,” the former prime minister said.

Last month, FMT reported that MACC was believed to be investigating the case, and that its officers had been interviewing smallholders linked to it.
Posted by wikisabah at 11:03:00 AM