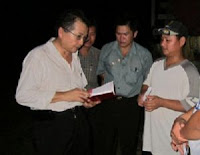 Hundreds of villagers from Kampung Bungaliu and Kampung Bubuk are determined to stop the survey of the land for a agropolitan project.

KOTA BELUD: In a remote corner of Sabah, a showdown is looming between natives of two kampungs near Pandasan here and government officers who are scheduled to do a land survey for a proposed 3,000-acre agropolitan project on what the natives claim is their land.

Hundreds of villagers from Kampung Bungaliu and Kampung Bubuk are determined to stop the survey of the land, which they claim native customary rights (NCR) to and which has already been cultivated with rubber trees and cash crops including hill paddy on shifting cultivation basis.

Leading the natives is the Bungaliu deputy chairman of the village development and security committee, Antonis Angkup, who told FMT they would not budge or be intimidated even though the district officer told them the surveying team would be accompanied by the police.

“This is our NCR land, it is not just state land, they must not simply force their way against our will as we know our rights and they are established as a law of the land,” he said.

Angkup, 35, said the chairman of the committee, Santin Guntalib, had been forced to inform the villagers yesterday that the land survey team would commence their work in the two kampungs from today.

“The chairman himself is against this agropolitan project here but he is under great pressure from the authorities not to openly speak against it… but we will oppose it no matter what,” he said.

According to Angkup, 800 acres of the total earmarked area for agropolitan is in nearby Rosok Kanibungan while the remaining 2,200 acres would be carved out from the Bungaliu and Bubuk areas.

Ankup himself was called to the district office and told not to object to the proposed federal-funded project to make Kota Belud a main food producer.

“I was called and they pressured me with a lot of strong words that I must not object the agropolitan project because it is a huge project by the government,” he told local activist lawyer Peter Marajin who visited his kampung a few weeks ago.

‘There is no logic’

Angkup said he was unafraid to stand for his and the people’s rights but he was taking precautions as the five government officers who had admonished him were determined that he not convey the kampung people’s view to anyone.

“There is no logic in the project as we already planted rubber trees on some of the land. Why must they come and cut down our trees and then re-plant them with the same rubber trees again?” he asked.

Marajin, who is also Sabah Progressive Party (SAPP) supreme council member, when contacted, said he was monitoring the situation closely.

“I am sending my people to the ground. Meanwhile I urge the government not to force its will against (the wishes of) its own people who are yearning for more information and participation in decision-making in the billion ringgit project.

“Participation by the rakyat is a tenet in democracy. Why are these civil servants going overboard trampling on the heads of simple kampung folks?

“Are they all suddenly experts on agropolitan development that they must not listen to the people, the very beneficiaries? Do they know whose money they are spending or are they under strict orders from politicians with vested interests that no dissenting voice on the proposed project must be heard?

“In our eagerness to bring development to the rural areas, we must also take into consideration the natives … the people’s view. It is not just developing the land… it is about human development,” he had said when he visited the villagers weeks ago.

The agropolitan project for Kota Belud involves clearing lands and re-planning development of thousands of hectares of state land for agriculture, especially rice.

But residents of various kampongs are complaining that companies with government links are forcing them off their NCR lands.

The billion-ringgit agropolitan project in Kota Belud district has already been rocked by controversy.

A heated debate is on-going on the proposed half-a-billion ringgit Tambatuon Dam which was ironically planned to be sited at one of the most beautiful and highly populated kampungs in Kota Belud.

The issue has drawn the attention of both state and national political leaders and comes after the federal and state governments were forced to back down on another ambitious project, a coal-powered electricity plant in Sinakut, Lahad Datu.

So far the MP for Kota Belud Abdul Rahman Dahlan has avoided a scheduled debate on Tambatuon Dam with DAP supremo Lim Kit Siang who nevertheless turned up in Kota Belud weeks ago for the debate.