Tan Kok Wai is not telling the truth 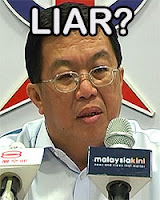 Letter to the Editor

DAP Disciplinary Committee chairman Tan Kok Wai was not telling the truth when he said to the press recently that there were no complaints toward the Kajang councillor and Lim Kit Siang's former political secretary Lee Kee Hiong and her uncle Lee Wye Weng's involvement in the suspected misappropriation of several Selangor constituency allocations.

Although the issues was highlighted again in Free Malaysia Today on Feb 13, the very first news was reported by The Star on Sep 12, 2010 when former Hulu Selangor district councillor K.A. Ramu said he has lodged a complaint with DAP against Lee Kee Hiong in 2008 over the disbursement of funds for the Kuala Kubu Baru constituency but no action was taken by DAP.

On Dec 9, 2010, Wangsa Maju MP Wee Choo Keong exposed to the press the relationship of Lee Wye Weng and Lee Kee Hiong which she had repeatedly denied they are relatives to the media on several occasions.

In May 2011, former Klang councilor Tee Boon Hock brought this issue to the press and showed the proof that Lee Wye Wing is in fact in bankruptcy and his company WSK services was only set up in July 2008, not as what Lee Kee Hiong claimed to have had a long track record in construction.

In August 2011, Seri Kembangan DAP member Yap Kun Min told the press he had made a complaint to DAP based on what Teoh Beng Hock told him before his death about Lee Kee Hiong and he was sacked by DAP for this open remark.

And in Nov 2011, DAP Selangor members were denied their right to bring up these issues in the party state convention. The speaker prohibited and even shut down the microphone when members wanted to speak up.

The way DAP handled the complaints were completely against the party motto of competency, accountability and transparency. There is no secret that Lee Kee Hiong is one of the most powerful party figures in DAP Selangor and said to be the next senator in line as her relationship to the party supreme leader. But does this mean DAP can ignore the rage from the grassroots?

The issues have haunted DAP and will continue to be highlighted again and again if there is no action taken towards those who are responsible for the misappropriation of public funds which caused the investigation by MACC and subsequently led to the death of Teoh Beng Hock.

DAP top leaders may think the issues will cool down eventually but obviously they are wrong as it was brought up again and again by the party members. The next general election is not far away and the issue will provide some bullet to DAP's opponents if the party chooses to close one eye for those who were responsible and show no fairness and justice.
Posted by wikisabah at 3:24:00 PM