‘Better for Sarawak to pull out too’ 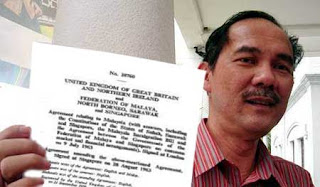 Following in the steps of Sabah STAR, a Sarawak NGO also openly states that the state would be better off being independent.

KUCHING: The Movement for Change, Sarawak (MoCS) said that the ongoing religious debate in Peninsular Malaysia which took on a dangerous turn of late has caused great concern among Sarawakians.

“We, Sarawakians, want no part in this heated quarrel over the Allah issue. The people of Sabah and Sarawak have no religious or racial problems and we don’t wish to be contaminated with ‘religious poison’ from bigots and ‘dangerous’ politicians like Ibrahim Ali from Malaya,” MoCS leader Francis Paul Siah said in a statement here today.

MoCS has always maintained that Sarawakians are a different breed and “our racial and religious harmony is genuine, unique and not hypocritical”.

“On these two fronts, the people of West Malaysia could take a cue from us. But would they?” Siah asked.

He said that the government had allowed Perkasa chief Ibrahim Ali to go “scot free” for uttering offensive and inflammatory words against Christians.

Last Saturday, the Perkasa leader has called on Muslims to burn the Malay version of the Bible.
“How can any Malaysian, let alone government leaders, with the right sense of mind continue to tolerate the likes of Ibrahim and his Perkasa group?

There are many other reasons why Sarawak would be better off by pulling out of Malaysia.
“The list is too long to detail here but as it stands today, I cannot think of one good reason why Sarawak should remain in Malaysia,” Siah said.

The MoCS leader said he also supported the suggestion from Sabah STAR deputy chairman Daniel Jambun that Sabah should leave the federation.

Jambun, in a statement today, said he was appalled by the weakness of the prime minister who is not even willing to flex his muscle to arrest, charge and punish Ibrahim for for fanning racial and religious hatred in the country.

“The prime minister’s silence is good reasons for Sabah to secede from the federation because past assurances for us have been reneged and violated, and that we have long felt that we are no longer defended by our own laws, by our own leaders, even by some of our kings,” he said.