Abu Sayyaf terrorists on the run with Malaysian captives 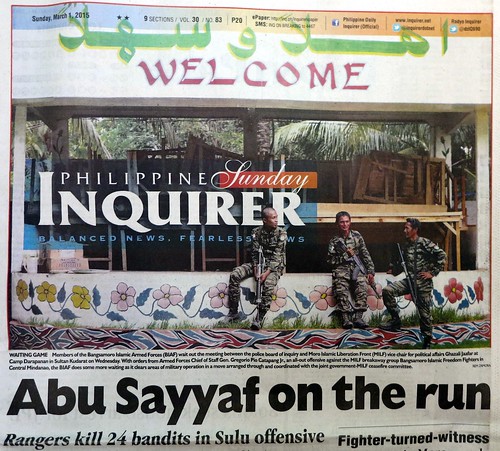 KOTA KINABALU - Five Malaysian hostages are on the run with their Abu Sayyaf captors in the mountainous jungles of Jolo amid an intense sustained Philippines military offensive against the gunmen.

Jolo anti-kidnapping activist Prof Octavio Dinampo said the five Malaysians who were among 13 Abu Sayyaf captives were constantly on the move in the jungles of the southern Philippines island.

“The Abu Sayyaf are facing problem of keeping their captives. They move around at night and by first daylight the military is already tracking them down,” he told The Star.

“It is a tough situation for the captives because they are always on the move and food for them will be scarce. It is hard to say if all these hostages can survive their ordeal,” Octavio added.

He said the Abu Sayyaf were known to be constantly moving around the jungles of Patikul, Indanan and Parang and were facing a problem of holding on to their captives.

The five were kidnapped from a tugboat near Dent Haven in Lahad Datu on July 18.

Three of the seven Indonesian captives were being held by gunmen under the command of Indang Susukan who was reportedly injured in a gunfight with Philippine soldiers in late August.

Also in the hands of the Abu Sayyaf gunmen known as the Sawadjan brothers were four Indonesians and a Norwegian captive.

Three of the Indonesians - Lorence Kotten, 34, Teo Dorus Kopong, 42, and Emanuel were abducted from a Malaysian fishing boat off Sinakut in Lahad Datu on July 9.

Another Indonesian fishing boat skipper Harman Mangga, 30, who was reportedly “abducted” on Aug 3 off Kinabatangan waters, has not been seen among the Abu Sayyaf kidnap victims.

It is believed that he had been freed after a private deal between the abductors and the Sandakan-based owners of the fishing vessel.

Octavio said the Philippines military had dispatched 9,000 soldiers to Jolo for the offensive against the Abu Sayyaf that was expected to last until at least December.

“Jolo is flooded with soldiers at the moment,” he said, adding that military operations were focused on five municipalities - Indanan, Parang, Patikul, Maimbung and Talipao.

The military offensive against the gunmen came amid Philippines president Rodrigo Duterte warning to the Abu Sayyaf that he would eat them “alive” as they were “beyond redemption.”

Duterte’s threat against the Abu Sayyaf, linked to the al-Qaeda terror group, was in response to the bomb blast that killed 14 people and injuring 67 others in the his hometown of Davao last week.
Posted by wikisabah at 4:26:00 PM