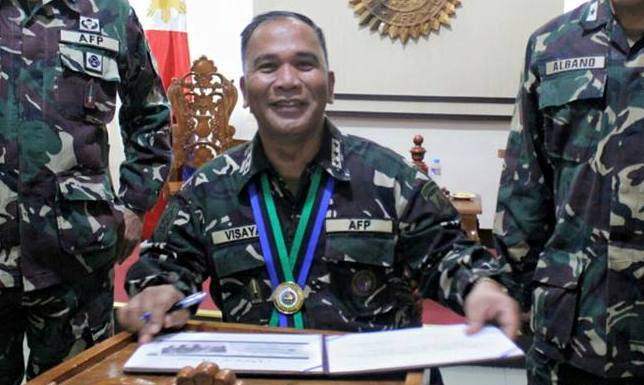 Visaya, who was the Army battalion commander during the 2004 bloody clashes with Hacienda Luisita workers, was appointed on July 1, 2016. He is set to retire on December 8, when he reaches the mandatory retirement age of 56 for the military.

Despite the short stint, Visaya is confident he can neutralize the terrorist group based in Mindanao which has been mostly involved in kidnap-for-ransom activities. He said he would channel all his energy in his last 3 months as AFP chief to fight them.

“Not really drive away (Abu Sayyaf) but neutralize them. That’s why...most of our resources are dedicated to them,” Visaya said after his confirmation hearing before the Commission on Appointments on Wednesday, September 21.

“Ang goal namin diyan (Our goal there is) no more hostages; Abu Sayyaf will be decimated,” he said, saying that is the "tall order of the President."

At present, Visaya said the terrorist group still has 16 hostages under its custody – 6 Indonesians, 5 Malaysians, 4 Filipinos, and one Dutch.

Norwegian hostage Kjartan Sekkingstad was released on September 16, a year he and 3 others were abducted in Samal Island in Davao del Norte in September 2015.

Visaya said a third of the Philippine Army has beendeployed to Tawi-Tawi, Basilan, and Jolo to eliminate the terrorist group.

The Abu Sayyaf, he said, has about 400 forces on the ground.

Visaya is staying as chief-of-staff for only 5 months, amid the government’s intensified fight against illegal drugs and terrorism.

Asked if his short stint would jeopardize this, Visaya acknowledged the need to extend the term of office of AFP chiefs.

“Kaya after this, inaano ko rin naman 'yan na it should be longer 'yung term ng chief of staff. Although the law says you can continue not beyond 3 years that’s the prerogative of the President,” Visaya said.

(That's why after this, I am pushing that the term of the chief of staff should be longer. Although the law says you can continue not beyond 3 years, that's the prerogative of the president.)

He, however, pointed out the President has the discretion to extend his appointment not more than 3 years past retirement age.

He noted that out of 47 chiefs-of-staff of the AFP, there were “about 10” generals whose terms were extended by the sitting president.

Is he expecting to be extended by President Duterte? “No naman… kasi (Not really because) that is always prerogative of the President," he said.

Beyond Hacienda Luisita, Visaya is said to be an effective counter-insurgency commander. He was closely associated with his superior at the time, the now detained Major General Jovito Palparan, who was 7th Infantry Division chief in charge of Army units in Central Luzon. Palparan faces various charges of human rights violations allegedly committed under the Arroyo government. – Rappler.com