Rise in Bumiputera pupils in aided Chinese schools in Sarawak 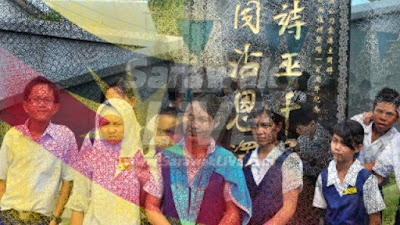 KUCHING - Twenty-three per cent of the 19,095 pupils in the 57 aided Chinese primary schools in Kuching, Samarahan and Serian are Bumiputeras.

The report quoted Liu Thian Leong, the head of the Association of The Boards of Management of Aided Chinese Primary Schools Kuching, Samarahan and Serian Division, as saying that the number of pupils registering at Chinese schools over the past 10 years had been increasing.

This, he said, was equally true of rural and urban areas.

These two schools are situated right in the city.

“More Bumiputera parents have realised the importance of Mandarin as a communication tool to enhance their children’s employability,” the Borneo Post quoted him as saying.

Liu said part of the reason most Bumiputera parents sent their children to aided Chinese primary schools was because of these schools’ academic performance, particularly in Mathematics and Science.

Also, he said, the boards of management had taken very good care of their schools and school heads and teachers were efficient in their work.

He said it was possible that a contributory factor to the increase in Bumiputera pupils was that the Chinese population had not seen any major increase.

Of the 57 schools, he said only one registered 100 per cent of Chinese pupils – SJK Chung Hua Sg Tapang Ulu, which has 37 pupils.

“Take a look at SJK Chung Hua Beliong, which has only one Chinese pupil. But the school board keeps it going for the community in the area,” he was quoted as saying. The school has 21 pupils.

Apart from SJK Chung Hua Beliong, 14 other schools have more than 50 per cent Bumiputera pupils, according to the Borneo Post report.