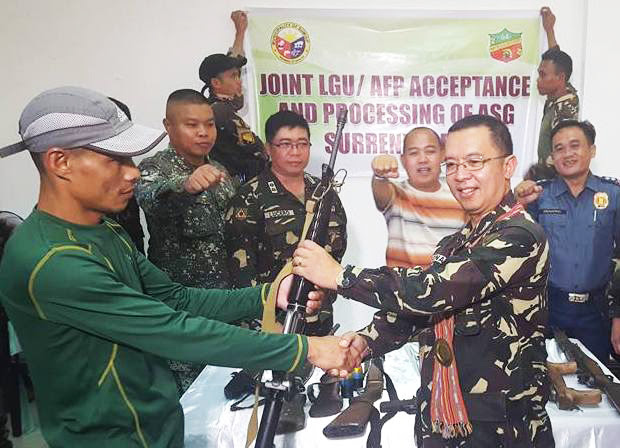 METRO MANILA (CNN Philippines) — Fearing for their lives in the wake of continued military operations, 20 members of the dreaded Abu Sayyaf Group (ASG) laid their arms down on Thursday in Sumisip, Basilan, according to the Armed Forces.

"This is the result of the relentless operation we are conducting where they suffered lots of casualties," said Donato said. "We are very open for surrenderees. We want to end this war in peace and pave the way for development in Basilan."

Eight high-powered firearms and two locally-made shotguns were also surrendered by the bandits.

Alias Tatong and his group were responsible for several ambuscades and skirmishes against the government troops, particularly in Barangays Sukaten and Baiwas of Sumisip.

The local authorities believed that there were still other members of the ASG who were willing to surrender.

"It's time to end this terrorist problem in our country. We want to make Basilan a peaceful place to live so that development will prosper. We are closely working with the AFP to decimate all these terrorist groups," Mayor Hattaman said.

Last month, the military overran the bandit strongholds in Baguindan, Tipo-Tipo.
Posted by wikisabah at 4:14:00 PM