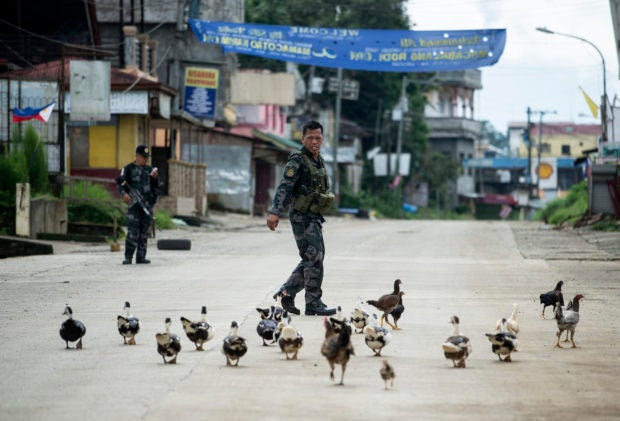 MARAWI CITY - Fighting between Philippine government troops and Islamic State-inspired terrorists resumed in Marawi City on Sunday as soon as an eight-hour ceasefire enforced by the military to allow residents to celebrate the end of Ramadan expired.

Civilian volunteers and members of the Moro Islamic Liberation Front used the 6am-to-2pm ceasefire to rescue people trapped in the war zone.

Terrorist snipers fired at positions held by government troops during the ceasefire, but there were no major clashes.

Assistant Secretary for the Peace Process Dickson Hermoso said the rescuers risked their lives to pluck out trapped civilians.

They managed to rescue five people, including a baby girl, he said. A sixth civilian, an elderly man named Hassan Ali who suffered a stroke six weeks ago, died before he could be rescued, Hermoso said.

It was not clear why the man died.

Earlier, Gen. Eduardo Año, chief of staff of the Armed Forces of the Philippines, said his troops would observe a “humanitarian pause” during Aidilfitri in Marawi, the most important Muslim city in the mainly Catholic Philippines.

“We declare a lull in our current operations in the city on that day as a manifestation of our high respect (for) the Islamic faith,” Año said in a statement.

Malacañang said the humanitarian pause was a “sincere gesture” of respect for Filipino Muslims.

“This humanitarian ceasefire on the part of the military and the government underscores our solidarity with our Muslim brethren as they celebrate the end of Ramadan,” presidential spokesperson Ernesto Abella said in a statement.

“It is a sincere gesture (that) shows respect (for) the Muslim faith and acknowledges (the) cultural diversity of our society,” he added.

Brig. Gen. Restituto Padilla, spokesperson for the AFP, said the “humanitarian pause was generally successful, although there was a little exchange of fire … in the morning and a few minutes past 2pm.”

After the ceasefire expired, the hostilities resumed, with automatic rifle and machine-gun fire and mortar blasts rocking the city.

It was the first planned respite in the massive offensive after a month of daily street battles and military air strikes that had left at least 280 terrorists, 69 soldiers and policemen, and 26 civilians dead.

The intense fighting has turned swaths of the mosque-dotted city, a bastion of the Islamic faith in Mindanao, into a smouldering war zone.

The fighting began on May 23 after a failed military attempt to capture Isnilon Hapilon, an Abu Sayyaf leader who had pledged allegiance to the Islamic State (IS) group in Iraq and Syria.

Hundreds of Abu Sayyaf gunmen and their allies from the Maute terror group, flying the black IS flag and backed by foreign fighters, attacked and laid siege to Marawi, sparking a bloody street battle.

Government troops have launched a relentless air and ground offensive in a bid to crush the militants but have failed to dislodge gunmen from entrenched positions in pockets of the city.

Much of the lakeside city is now in ruins, while most of its 264,000 residents have fled to evacuation centres in Iligan City or to the homes of relatives and friends in other towns.

In Iligan, just north of Marawi, evacuees from the conflict dressed in colourful flowing robes marked the end of Ramadan by holding prayers on the grounds of the City Hall.

Padilla said around 500 civilians remained trapped in areas where the fighting was concentrated.

Fourteen people, mostly elderly, were rescued on Friday, he said.

After the ceasefire ends, “we will continue to try to enter the areas occupied by them and liberate Marawi,” Padilla said in a radio interview.

Marawi’s Mayor Majul Usman Gandamra said volunteers took advantage of the lull to “rescue” some of the trapped civilians.

“This (Aidilfitri) is memorable because we are celebrating it away from our homes,” he said.

“We are hoping that this problem will soon be over… I urge everybody to continue praying so that the turmoil in our city of Marawi will end,” the mayor said in a television interview.

The spokesperson for the Lanao del Sur provincial crisis management committee, Zia Alonto Adiong, said a feast was prepared for about 1,000 evacuees sheltering at the provincial capitol, but noted that this was “the saddest Aidilfitri” in the province.

“This local militant group robbed us of the chance to observe Ramadan peacefully and stole from us the opportunity to celebrate the festival and be with our loved ones during this religious occasion,” he said, referring to the Maute group.

President Duterte has declared martial law throughout Mindanao to quell what he calls a rebellion aimed at establishing an IS province in the south.

Foreign fighters, including those from Chechnya, Indonesia and Malaysia, are among those killed in the Marawi conflict, according to the military.

A senior military commander said on Saturday that Hapilon may have slipped out of the city.