Indonesia to respond to international criticism of Ahok jailing 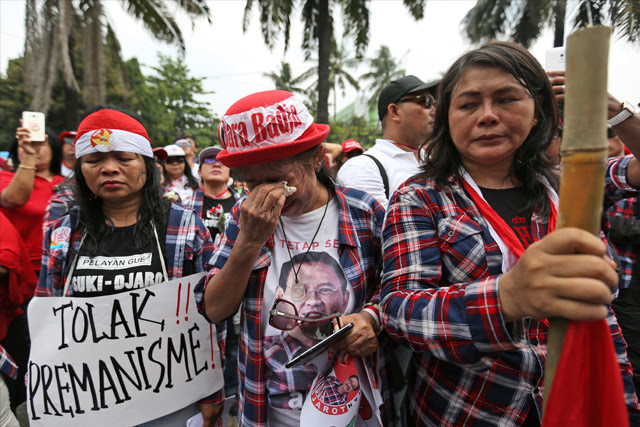 The country’s Law and Human Rights Minister Yasonna Laoly responded to criticism from the United Nations, the European Union and human rights bodies by stating “Yes, that’s said when I was in Geneva yesterday, in the Universal Periodic Review hearing. There were calls for it.”

Tempo reported that speaking to reporters on Wednesday, Yasonna said “We will discuss it. A thorough study is needed.”

The minister was, however, non-committal, stating that the government would evaluate recommendations handed down from other nations at Indonesia’s Universal Periodic Review last week – a process where the Human Rights Council evaluates rights protection in member countries.

Many states parties at the hearing in Geneva expressed concern regarding freedom of religion in Indonesia given a sectarian-charged campaign against Ahok which contributed to his defeat in an April 19 runoff election. Several urged Indonesia to review and repeal its blasphemy laws.

“Laws that criminalise blasphemy when applied in a discriminatory manner can have a serious inhibiting effect on freedom of expression and on freedom of religion or belief,” said a statement from the EU’s Delegation in Indonesia on Tuesday.

The EU added that it hoped the country would defend its “long-standing tradition of tolerance and pluralism.”

The UK’s first Muslim Ambassador to Indonesia Moazzam Malik tweeted on Wednesday that he knows and admires Ahok, is praying for the governor’s wife and children, and that “leaders must step up to protect tolerance and harmony.”

President Joko “Jokowi” Widodo – who is a political ally of Ahok and his former boss – responded to the conviction by saying Indonesia’s government would not try to exert influence over the case.

“In a democratic country … the government cannot intervene in the legal process we have,” he said.