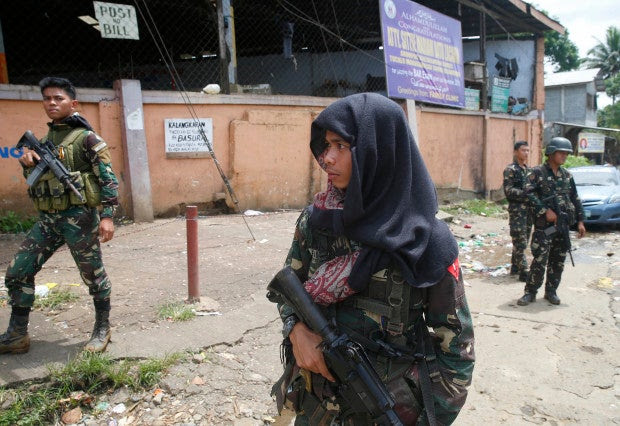 The conflict in Marawi City and the declaration of martial law in Mindanao could produce a new generation of war orphans taking up arms against the government, a Muslim professor and researcher warned on Thursday.

“Emerging rebels are mostly youth who are orphans of war,” Darwin Absari, a professor of the Institute of Islamic Studies of the University of the Philippines, said in a press briefing conducted by an alliance of educators that had called for the lifting of martial law in Mindanao.

“[They have] no ideology, no direction. They don’t know anything but carry arms and shout ‘Allahu Akbar’ (Allah is great), even without the understanding of Islam,” Absari said.

He cited the declaration of martial law by President Ferdinand Marcos in 1972, which he said spurred the increase in the number of rebels in Mindanao after the military targeted Moro communities on the island.

“The wounds have not yet healed, and we are [repeating] it,” he said.

“In this campaign, we are breeding more enemies instead of bringing down the rebellion,” Absari said, referring to the military campaign to dislodge fighters from the Maute terror group holed up in Marawi City.

Nearly 200 people have been killed in the fighting, more than 130 of them gunmen from the Maute group and its ally Abu Sayyaf group.

Thomas Koruth Samuel, director of research and publications of the Southeast Asia Regional Center for Counterterrorism, said there was little doubt the youth were beginning to play a significant role in terrorism.

In his report, “The Lure of Youth into Terrorism,” posted on the center’s website, Samuel cited the involvement of youth in the growth of the Abu Sayyaf group.

For instance, he said, Abdurajak Janjalani was only 27 when he formed the bandit group.

Khadaffy Janjalani was 22 when he took over as leader of the group in 1998 after his brother Abdurajak was killed in a police operation.

Absari said most of the new generation of rebels never went to school.

Statistics from the Department of Education (DepEd) showed that the fighting in Marawi had displaced more than 22,000 students.

Partial reports gathered by the DepEd showed that as of Tuesday, only more than 2,400 displaced students had been enrolled in other regions of the country, including 171 in Metro Manila.

Benjamin Valbuena, president of the Alliance of Concerned Teachers, said 132 schools remained closed despite the start of the new school year, affecting more than 2,200 teachers who had been displaced by the conflict in Marawi.

“Our worry is that the schools are so destroyed that our youth cannot study anymore,” Absari said. “[Those sent to other regions], imagine coming from war and being sent far away from their families. I don’t think they can study well.”

Absari said it was not enough for the government to expel the gunmen from Marawi, it must also deal with the roots of the conflict, particularly poverty and underdevelopment in Mindanao.

“While we wait, younger generations [of rebels] emerge,” he said. “Even if we bring down [the] Maute [group], there will always be a new breed of Moro fighters unless we put a solution to the problem.”

By Jhesset O. Enano - Reporter Daily Inquirer
With a report from Pauline Faye Tria
Posted by wikisabah at 5:04:00 PM