Rodrigo Duterte: One year on, as popular as ever 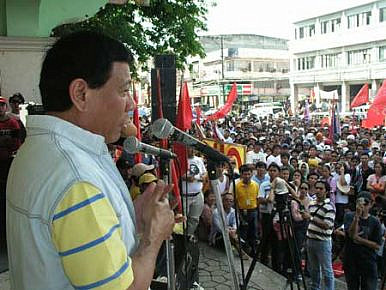 The 72-year-old is still popular with Filipinos despite his leadership being marred by his so-called 'war on drugs'.

It has been one year since Rodrigo Duterte, also known as The Punisher, was elected as Philippines' president, after riding a platform of suppressing crime, the spread of drugs and corruption.

Before coming to power, the former mayor had promised a wide range of reforms, including tackling poverty, unemployment and improving the economy.

Despite taking Filipinos on a promised "rough ride" of drug war killings and foreign policy U-turns, the 72-year-old remains as popular as ever as he marks 12 months in office.

According to pollsters at the Social Weather Stations, 80 percent say they have "much trust" with his administration's performance.

"People like the man," Ricardo Abad, the head of sociology and anthropology at Ateneo University in Manila, told the AFP news agency.

"People may disagree with his policies, or are maybe ambivalent towards them, but because they like him, people will tend to give him the benefit of the doubt."

"He has verbally attacked journalists, challenged the Supreme Court and even threatened international rights groups.

"This has led many here to worry that Duterte is running his presidency largely on impulse."

In his inauguration speech, Duterte typically sought not to sugarcoat his plans for the Philippines.

"The ride will be rough. But come join me just the same," Duterte said.

The roughest part of the ride had for most of the past year been his crackdown on drugs.

Duterte has drawn global criticism for the campaign which is believed to have claimed more than 7,000 lives and led to a spike in extrajudicial killings and alleged human rights abuses.

Rights groups and other critics warned Duterte may be orchestrating a crime against humanity, alleging he had unleashed corrupt police and vigilante death squads on a campaign of mass murder.

Duterte had made the drug war the top focus of his presidency until May 23, when fighters linked to the Islamic State of Iraq and the Levant (ISIL, also known as ISIS) rampaged through the southern city of Marawi.

He immediately imposed martial law across the southern third of the Philippines, home to roughly 20 million people, to quell what he said was a bid by ISIL to establish a local caliphate.

But despite a relentless bombing campaign backed by the US, Duterte's military has been unable to dislodge the armed group.

The fighting has claimed more than 400 lives, according to the government, and it shows no signs of ending.

Another example of Duterte's popularity is his "super majority" in the lower house of congress, where there are just seven opposition members in the 296-member chamber.

Even one of the opposition lawmakers, Edcel Lagman, offered grudging praise this week.

"Despite his unpresidential demeanour, profane language, abusive rhetoric and flawed policy statements, President Rodrigo Duterte, in his own inscrutable way, has held the nation together," he said.

But Lagman said, with Duterte's promises of "change" yet to become reality, his popularity had started to slide.

If that is happening, Duterte's "super majority" could fall apart.

In the Philippines, lawmakers from parties across the political spectrum typically flock to a popular president in the early stages of his or her term.

But the politicians, driven by self-interest rather than ideology, have also in the past quickly jumped off the bandwagon when approval ratings dropped.
Posted by wikisabah at 3:12:00 PM