Dr M: We will begin process of freeing Anwar within one week of forming government 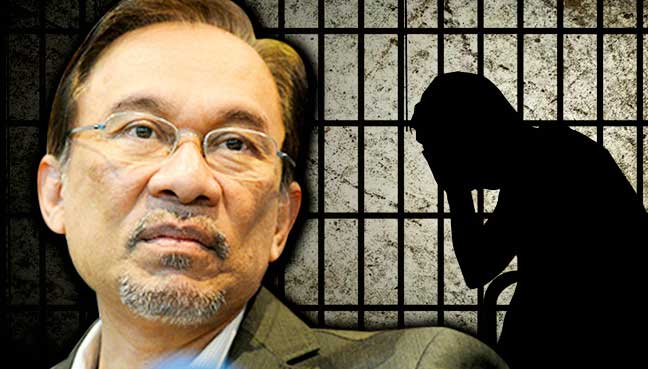 PETALING JAYA - Pakatan Harapan has committed to the process of freeing Datuk Seri Anwar Ibrahim from jail within one week of forming the next government.

Its newly announced chairman Tun Dr Mahathir Mohamad (pic), the former premier of 22 years, said that this would follow the legal process with the application of a royal pardon for Anwar who has been jailed for sodomy.

"We will wait for the law to take its course, not immediately because the prime minister who takes over will have a lot to do," he said at a press conference early Friday morning after a Pakatan Harapan presidential council meeting at the PKR headquarters.

He was asked if Anwar would become prime minister if Pakatan Harapan wins the next general election.

Anwar served as deputy prime minister under Dr Mahathir for five years before being sacked by the latter in 1998.

He is currently serving the sentence at the Sungai Buloh prison.

When asked who would be Pakatan Harapan's choice for the post of prime minister, Dr Mahathir said they would announce it soon.

"The seventh (PM) we will announce but today we are announcing the eighth (PM)," he quipped, suggesting that Anwar was the choice as the eighth prime minister of the country.

Dr Mahathir said among their goals were to topple the administration of Prime Minister Datuk Seri Najib Tun Razak, free all political prisoners and drop all politically-motivated charges in court, the reform of laws and institutions, and placing a two-term limit to the prime minister's post.

The coalition also vowed to eliminate the Goods and Services Tax (GST), stabilise the price of fuel and form a Royal Commission of Inquiry (RCI) on 1MDB, among other things, within 100 days of forming the next government.

Pakatan Harapan which comprises PKR, Parti Pribumi Bersatu Malaysia, Amanah and DAP also unveiled its logo at the press conference.
Posted by wikisabah at 10:36:00 AM