Bosi: Look like they only want to fool their KL boss 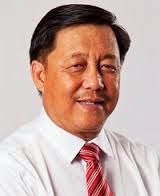 "I don`t mind they organised the function because it is their duty to do so. But I was not even informed about the event and suddenly I found out I would be speaking on that day, through the banner," he said.

Bosi added that the organiser had never asked him for his consent before his image was used on the banner.

"Look like they only want to fool Kit Siang by doing this," he said.

The event which will be held at Pusat Restoran Pelancongan Pedalaman Keningau will commence with a traditional Oath Stone ritual by a group of native from Kg Alab Lanas.

The organiser also planned a launching of the young KDMR Movement.

The Oath Stone movement was started by Bosi in 2014 when he led the erection of the Stone`s replica in Kampung Kionsom, Inanam.

Since then,not less than six replicas have been erected by Bosi and his team.

The original oath stone was ereted on Aug 31,1964 to commemorate the formation of Malaysia.

The oath stone came with three guarantees by the Malaysian goverment to the native of the Interior in return for their support to the Federation of Malaysia.

These guarantees are freedom of religion in Sabah, land is under the control of the Sabah goverment and thirdly, the goverment to respect and preserve the native custom, culture and tradition.

By Tracy Patrick
Posted by wikisabah at 4:55:00 PM