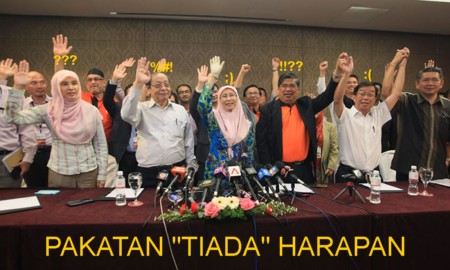 KOTA BELUD - Sabah opposition chief Datuk Lajim Ukin made a clarion call to the top leadership of Parti Keadilan Rakyat (Keadilan) to resolve all lingering internal bickering ahead of an imminent general election.

“The party leadership needs to stop squabbling among themselves and focus on strategising on our strength, including forging co-operation with local parties,” he said when officiating at the Kota Belud Keadilan’s annual general meeting here yesterday.

Lajim, who is also Keadilan Sabah chairman and Klias assemblyman, said he was disappointed with the on-going internal bickering in Keadilan.

“We have no choice but to support the institution of the president and deputy president offices. There is nothing wrong with political parties, it is those leading the parties who make mistakes. Please look after the party well. I have said what I wanted to say for Sabah in successive national meetings, including in the weekly political bureau that I attend,” he said.

Lajim also said he was upset that many of his suggestions to the party in his three years of helming Sabah, have so far not been given due recognition in the manner he had wanted despite the fact that it was agreed to by party’s de facto leader Datuk Seri Anwar Ibrahim and president Datuk Seri Dr Wan Azizah Wan Ismail.

The veteran politician from Beaufort also said that in fact he sometimes gets irritated by some leaders from the centre who tried to interfere in the running of Sabah Keadilan which is supposed to enjoy greater autonomy.

“Even very recently, the national woman deputy head came to Sabah and tried to coax the state woman wing to reshuffle the settled line-up. The women here have decided who they wanted to lead, so why is the need for such call. Can’t we just wait for party election and let the members elect their leaders who will determine the line-up,?” he said.

Lajim foresees that any future attempts from the centre to influence and interfere the direction of the state Keadilan will render the party’s purported support for Sabah autonomy meaningless.

“It is not easy looking after the party in Sabah as there is no fund from the centre. If Pakatan Harapan (PH) does not work with local parties in the forthcoming general election, we can forget about going to Putrajaya,” he said, adding that PH is no match to BN well-oiled machineries.