This is the name ISIS hates being called more than ‘Daesh’ 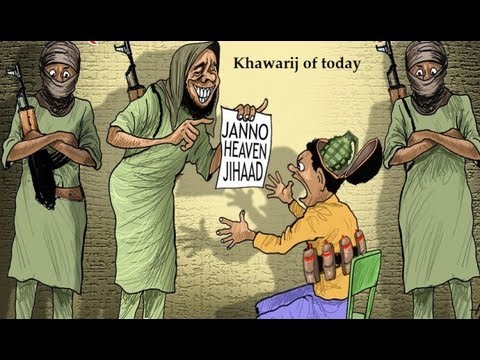 Most people know the world’s most barbaric terrorist group as ISIS or the Islamic State.

Some world leaders have taken to calling them “Daesh,” knowing the terror group hates the name so much that its militant members have threatened to “cut the tongue” out of anyone who used it.

But some experts say there’s one moniker the terrorist group hates even more than Daesh — and enemies of ISIS have been using it to taunt the group.

Malcolm Nance, a terrorism expert and veteran military-intelligence officer, made note of the name “Khawarij” during a terrorism debate at the Comedy Cellar in New York City last month.

“They are the 7th century Islamic cult,” Nance explained in an email to Business Insider. “[T]he reason they don’t like it is because they are considered apostates in the Quran. The Prophet Mohammed warned about them being false Muslims.”

Some Muslims — and even ISIS’ jihadi rivals — refer to ISIS members as “Khawarij” or “Kharijites.” The leader of Al Qaeda, Ayman al-Zawahiri, recently referred to the followers of ISIS leader Abu Bakr al-Baghdadi by the name, according to Thomas Joscelyn, a senior fellow at the Foundation for Defense of Democracies and an expert on terrorist groups.

Joscelyn explained: “It refers to an early breakaway faction of Muslims considered extreme for branding other Muslims as disbelievers because they supposedly weren’t pure enough in their faith. Today, Al Qaeda and other jihadists use the term as a synonym for ‘extremist,’ or other derogatory adjectives, to describe members of the Islamic State.”

ISIS responds to this by arguing that Al Qaeda and other jihadists not affiliated with ISIS “have fallen into a state of nonbelief,” Joscelyn said.

“The implication is that the Islamic State isn’t similar to the Kharijites because the groups leveling this criticism aren’t true Muslims, so therefore they deserve to be branded as apostates,” Joscelyn said in an email.

“That’s the Islamic State’s exclusionary argument. It is both a source of strength for them, as members and new recruits can feel like they are part of the only righteous Islamic entity on the planet, and a weakness, as it makes it difficult for the Islamic State to make tactical compromises with groups that are similar in terms of ideology.”

But this exclusionary argument lends credence to the branding of ISIS as Khawarij.

During ISIS’ earliest days, when it was Al Qaeda in Iraq, the group gained a reputation for being especially brutal, so much so that Zawahiri wrote letters to the group’s leadership warning them to tone down the violence. Al Qaeda in Iraq, a Sunni group, was known for targeting Shia Muslims in Iraq, something Al Qaeda Central has shied away from.

And Baghdadi would even disavow other Sunni militant groups. Michael Weiss and Hassan Hassan quoted an Al Qaeda in Iraq commander from Fallujah in their book “ISIS: Inside the Army of Terror” who said that Baghdadi “was always very consistent about his position on fellow Sunni militant groups that were not part of his own organization.”

Baghdadi said fighting those groups was more of a priority than fighting the Americans who invaded Iraq, according to the commander.

Still, ISIS apparently doesn’t like to be compared to the Kharijites who used similar tactics.

Analysts point to documents purporting to be from ISIS that argue why the group shouldn’t be labeled as such. But it’s unclear whether the central leadership itself has spoken out against the use of the name.

“I’m not sure that being labeled Khawarij is the soft spot or the vulnerable spot that many make it out to be,” Charlie Winter, an expert on jihadist propaganda and associate fellow at the International Centre for Counterterrorism at The Hague, told Business Insider.

He continued: “I think if anything, they revel in being labeled anything really. The more that these accusations are made against them, the more vehement they are in denying them and, in a sense, the more separated they become from mainstream Islam, the better. They want to be seen as the group that’s returning to the very earliest iteration of Islam.”

Winter cautioned against thinking that labels are effective weapons against ISIS.

“When policymakers or analysts or military men wouldn’t stop talking about the Kharijites or takfiris, using these very controversial religious terms in a context they aren’t necessarily comfortable with, that opens up a debate that the people using those words will struggle a huge amount with,” he said.

“It happened with [US Secretary of State] John Kerry when he was calling the Islamic State takfiris. It opens up a part of the discussion on the Islamic State that non-Muslims I don’t think necessarily should try and get too heavily involved in because it’s not necessarily appropriate for these incredibly loaded and complicated, complex terms to be used potentially incorrectly.”