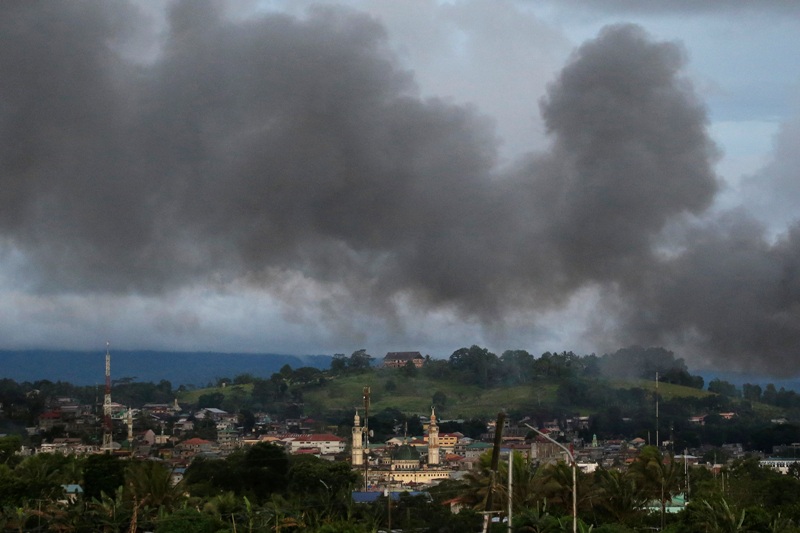 MANILA, Philippines — Islamic State-inspired local terror groups planned to burn down the entire Marawi City as a precursor of uprisings across Mindanao, according to the chief state lawyer.

Solicitor General Jose Calida said that the Maute group was supposed to burn down the city of Marawi on May 26, the start of Ramadan.

"The said attack would have served as the precursor for other rebel groups to stage their own uprisings across Mindanao in a bid to simultaneously establish a wilayah in the region," Calida said in his consolidated comment the petitions against the declaration of martial law in Mindanao.

The statement indicates that the Duterte administration was aware of the plans of the Maute group, a self-proclaimed affiliate of the Syria-based ISIS, to occupy Marawi days before the attack on May 23.

Prior to the May 23 clash between government troops and the ISIS-inspired local terror group, leader Abdullah Maute had dispatched his followers to the cities of Marawi, Iligan and Cagayan de Oro.

"AFP intelligence reports disclose that as early as 18 April 2017, Abdullah Maute had dispatched his followers to the cities of Marawi, Iligan, and Cagayan de Oro to conduct bombing operations, carnapping, and 'liquidation' of AFP and PNP personnel in the said areas," Calida said.

The military earlier revealed that materials recovered in Marawi City show that the attacks had been planned before the government forces' operation to arrest Hapilon.

The solicitor general argued that local rebel groups' reported plan to establish a wilayah or an administrative division would constitute rebellion, one of the circumstances where the president can declare martial law.

Under Article 7, Section 18 of the 1987 Constitution, the president has the power to declare martial law in cases of "invasion or rebellion, when the public safety requires it" for a maximum of 60 days.

But petitioners before the Supreme Court on Tuesday argued that a rebellion should be actual and not merely potential for a proclamation of martial law in Mindanao.

"Absent the existence of actual rebellion in the entire Mindanao, there is thus no justification to place the entire Mindanao region under martial law and likewise to suspend the writ in the same area," said lawyer Maria Cristina Yambot before during the oral arguments.

She added that the capacity or capability of terror groups to conduct rebellion does not sufficiently fulfill the constitutional requirement of an occurring rebellion.

In a report submitted to the Senate and the House of Representatives, Duterte said that the local terror group planned to remove Marawi and eventually the rest of Mindanao from its allegiance to the government.

"The proclamation mentions the capability of the Maute group and other rebel groups to sow terror and cause death and damage to property not only in Lanao del Sur but in other parts in Mindanao. Likewise the report to Congress points to the plans of Maute to establish daesh wilayat covering the entire Mindanao. Instead of being anchored on the existence of an actual rebellion, the proclamation is based on a mere threat or at best an imminent threat," Yambot said.

The planned attack of the rebels was foiled when government troops initiated an operation to neutralize Abu Sayyaf subleader Isnilon Hapilon on May 23.

The Maute group was forced to prematurely exercise the planned siege of Marawi following the joint military and police operation against Hapilon and the Maute group operational leaders.

By Patricia Lourdes Viray with Camille Diola
Posted by wikisabah at 5:04:00 PM