A few things missing in the budget 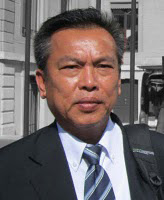 It is understandable that the BN leaders are voicing out all sorts of support for the just presented budget. But I feel there is a need for us to be reminded that there are quite a few things which should have been included for Sabah.

Sabah, as we all know, is saddled with a lot of problems, mainly illegals, energy supply, crimes, and poverty. The budget concentrated too much on giving away goodies. But the first thing that needs to be done for Sabah is to introduce programs to jumpstart the sluggish economy.

The people in the villages and the interiors need to be given opportunities to participate in the economic process in more meaningful ways.

The only real blessing they have now is the high price of rubber which has given good incomes to many families. But these are limited only to those with rubber trees or those who could tap people’s rubber trees. Most of them do not enjoy this, and still have to subsist on farm produces which are hardly sufficient to keep them afloat.

The government needs to introduce small-scale cash-crop, fowl- or livestock-breeding programs in joint-ventures with various government agencies like the KPD and Mara. We have a severe food shortage problem in the state, with 70 percent dependence on imported food. The solution to this longstanding problem should be our first priority under every budget, state or federal. But why are the state and federal government always forgetting to address this part of the economy that has long become a burden? Why don’t we strategise to harness the energy of the native farmers to produce food in small scales? Why just focus on large-scale farming projects which takes a long time to bear fruits?

The promise to eradicate poverty is now an old story. And what the government has been doing is to give cash and help in kind to the villagers. We all know this doesn’t help much because handouts don’t last longer than a few days. What the poor villagers need are facilities to enable them to be productive and thus raise their income level. The government still has the “give fish” rather than the “teach them to fish” approach just because the former is easy to do and attracts more votes in the short term.

I also agree with SAPP that another huge problem that we need to solve is the energy problem. With the cancellation of the coal-fired power plant, an immediate alternative, e.g. gas-powered power plants, should have been proposed and funded for implementation. Also, the government has not answered the query about why our gas will be piped to Bintulu when we need the gas to generate energy in Sabah.

And why not also establish an R&D institute to research the possibilities for many alternative energy sources? Such alternatives have been researched in the west and many countries are already trying out new, green, and cost-saving energy alternatives. There is one country which is even implementing an underwater water current turbine power generating system, which is an alternative to the more conventional wind turbine system.

The allocation to build contraptions to collect rain water in the interiors is a good one and is long overdue. But it shouldn’t be just another form of the gravity water supply system that become useless during the dry seasons. It should be a system that collects enough water to last until the dry seasons are over, or else it will be meaningless. Sabah has an abundant rain water, and one rainy season can supply water for the whole of Sabah for many years if we had enough determination to build many small collection reservoirs (not dams).

As I see it, the budget didn’t address the biggest problems facing Sabah, and the many goodies seem short-term and temporary. The budget didn’t help much to lighten the nation’s burdens, especially with the economy and national debt which has been increasing.