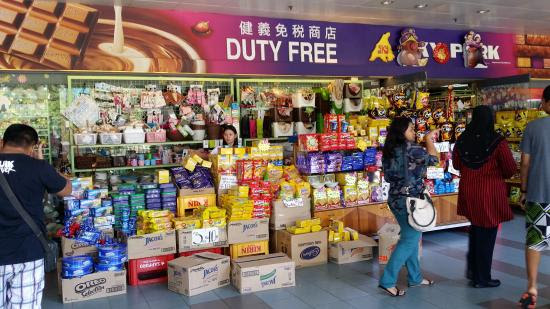 LABUAN - Deputy Prime Minister Datuk Seri Dr Ahmad Zahid Hamidi has vowed to personally oppose any move to abolish or alter Labuan’s duty-free status, adding that the island should not be penalised because of the smuggling of such goods.

“Labuan’s duty-free status will be maintained and if there is any problem due to smuggling, the way to go about it is to improve law enforcement. It will be wrong to victimise the people of Labuan for something that is not their doing,” he said when opening the Labuan Umno meeting here yesterday.

Leaders, including Labuan MP Datuk Rozman Isli, had warned against a move to curb the island’s duty-free trade by limiting the number of outlets selling such items.

Rozman said such a move would result in a backlash for Labuan’s economy that was already in the doldrums due to a slowdown in the oil and gas sector.

Under the proposed new rules to curb smuggling – which have been postponed for three months from Aug 1 – liquor and tobacco products can only be bought at designated duty-free shops, with customers recorded in a database to prevent them from buying above the quota.

Speaking to reporters later, Dr Ahmad Zahid said the special task force to turn around Labuan’s economy would be meeting the Finance Ministry and Customs to discuss ways to curb smuggling.

The task force, which he chaired and included Rozman and former Labuan MPs Datuk Suhaili Abdul Rahman and Datuk Yusof Mahal, would find ways to transform the island’s economy.

“There are many things that need to be done, including having direct flights between Labuan and China, and we are working on this now,” Dr Ahmad Zahid said, adding that the task force would hold its first meeting next month.

The issuance of transport licences for boat services around Labuan would also be sped up and tourism- related businesses such as home­stays, handicraft-making and food preparation be encouraged, he said.