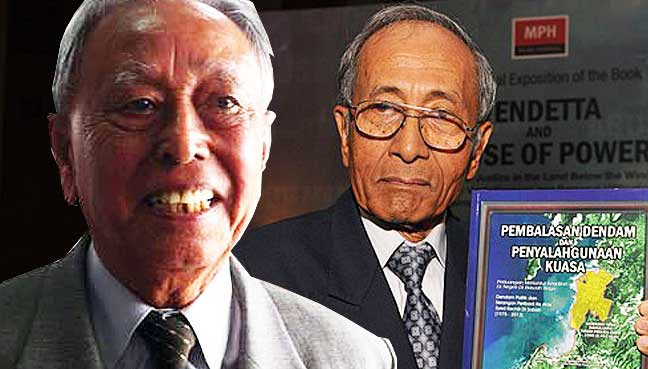 Harris is suing Shaari over allegations made in the latter’s book “Vendetta and Abuse of Power: Quest for Justice in the Land Below the Wind – Political Vilification Against Syed Kecik in Sabah (1975-2013)”.

He is also suing two others, namely Syed Salem, the younger brother of Syed Kechik Syed Mohamed Al-Bukhary, and MPH Group which published the book in 2014.

Harris claims that Syed Salem is the source of the allegations in the book. Syed Kechik’s expulsion from Sabah was the theme of the Berjaya Party’s election campaign in 1976.

Among the allegations mentioned in the book are that Harris abused his power as Sabah chief minister and was vindictive in seizing Syed Kechik’s properties in Sabah following Berjaya taking over the Sabah Government.

Syed Kechik was said to be someone whom Sabahans had “hated” for many years, until he passed away in 2009 at 81 years.

A lawyer from Kedah, Syed Kechik was said to have been the real force behind former chief minister Mustapha Harun’s iron rule under Usno for nine years until 1976.

Berjaya, which swept to power under Fuad Stephens, ended Mustapha’s rule in the Sabah elections in April 1976. However, just two months later, Stephens perished in an air crash and Harris took over as chief minister.

Harris and Syed Kechik were bitter foes. The former, as a result, resigned twice from the state cabinet, first as finance minister and later as industrial development minister.

The bitterness culminated after 20 years with a judge ordering the Sabah Government to compensate Syed Kechik RM40 million for 2,500 acres it had seized to build Universiti Sabah Malaysia (UMS). The land was owned by Zara Sdn Bhd, named after Syed Kechik’s eldest daughter.

Zara is married to Syed Kechik’s nephew, Syed Mokhtar al-Bukhary, who is currently the richest Bumiputera in Malaysia.

It was Harris who took back Syed Kechik’s vast timber concessions in Sabah.
Posted by wikisabah at 1:16:00 PM