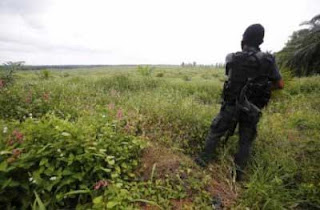 LAHAD DATU - Two police commandoes were killed after coming under mortar fire when violence erupted in the standoff between security forces and a group of armed Filipinos occupying a village in Lahad Datu in Sabah.

Ten members of the group had been killed when police raided their camp, a spokesman for the group had said earlier. (File photo of a police commando guarding the area about 3km away from the location where armed Filipino men are holding off. — Reuters pic)

National news agency Bernama reported that its reporters saw the bodies of the two commandoes being taken away to hospital.

Silence has fallen on the seaside village after deadly gunfire erupted this morning between security forces and the armed Filipino rebels occupying the Sabah village, Philippine media reported today.

Abraham Idjirani, a spokesman for the rebels, reportedly said that 10 members of the group were killed when police raided their camp.

The Philippine Daily Inquirer’s online news site quoted Free Radio Sarawak as saying that the Felda Sahabat 17 oil palm plantation near KampungTanduo, where the rebels have been holed up since February 9, was filled with an “uncanny silence”.

Lahad Datu, which is about 130km away from the battle site, was also described as a “ghost town’, with all shops in the town centre closed as army patrols moved about, with some standing guard at schools and the district hospital.

Four intruders were injured, according to Princess Jaycel Kiram, the daughter of self-proclaimed Sulu Sultan Jamallul Kiram III, as reported in the Philippine Daily Inquirer.

SAPP chief Datuk Yong Teck Lee told The Malaysian Insider that a curfew would be imposed on Lahad Datu at 4pm, prohibiting all vehicle movements.

A police officer in the Lahad Datu police district headquarters, who did not want to be named, told The Malaysian Insider, however, that there have been no orders of a curfew or emergency so far.

Yong also said rumours have been swirling among Lahad Datu residents about more rebels coming into Semporna and Silam.

“People more anxiety (sic) than fear (because) for a few decades, violent incidents have been on and off, this being the most long drawn incident,” Yong said in a text message to The Malaysian Insider.

Jamallul reportedly stressed today that the group would not leave the area despite the assault.

Philippine Foreign Affairs spokesman Raul Hernandez, however, reportedly said that there were no casualties.

Home Minister Datuk Seri Hishammuddin Hussein denied that Malaysian authorities had shot the Filipino rebels, tweeting: “I confirm that our security forces have not taken a single shot but were shot at at 10am this morning!”

Bernama also quoted Hishammuddin as saying that Malaysia had given the intruders enough time to leave Sabah peacefully.

About 180 Filipino rebels, including 30 gunmen, invaded Sabah on February 9 and have refused to leave, despite pleas from the Malaysian and Philippine governments.

They declared yesterday that they would never surrender and were willing to die in Sabah.

The family of rebel group leader Agbimuddin Kiram, who is the brother of Jamallul, denied that Agbimuddin was arrested by the Malaysian authorities, according to Solar News.

Residents in Lahad Datu told The Malaysian Insider that business owners were closing shops near the town and on the outskirts while parents were picking up their children from schools.

He said several military flights landed this morning, according to locals.

The armed group, suspected of being a faction of a Philippine Muslim rebel group, claims to belong to the “royal army” of the Sulu sultanate.

The bizarre drama had threatened to stir tension between the Southeast Asian neighbours whose ties have been periodically frayed by security and migration problems caused by a porous sea border.

News wire Reuters had reported that Malaysia pays a token sum to the Sultanate of Sulu each year for the “rental” of Sabah — an arrangement that stretches back to British colonial times.

In 2000, a group of militants from the southern Philippines kidnapped 21 tourists from the Sabah diving resort of Sipadan.

In 1985, 11 people were killed when gunmen, believed to be from the southern Philippines, entered Lahad Datu, shooting at random before robbing the local branch of Standard Chartered Bank.